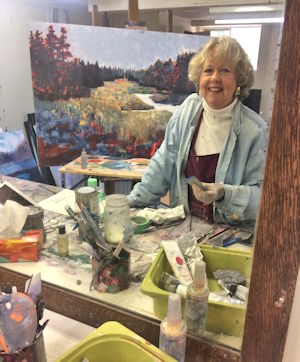 Jay Anderson has been painting since 1999
Anderson is an accomplished plein air painter. Her work expresses her joy of the great outdoors. The human figure also plays a big role in Anderson’s creative endeavours as well as abstracting the landscape.

At the Cube Gallery in Wellington Village, in 2010, we saw Anderson present interesting and thoughtful work at the “Points of View” Champlain Lookout show where she interpreted the landscape through oil and mixed media. In 2011 Anderson created unusual and not often seen views of back alleys, using her flair for colour and mood in her exceptional pieces in the “Ottawa Alleyways” show. We saw the 3rd show at the Cube in the spring of 2012, called ‘Otttawater’ which was another vibrant and successful show. The 2015 show of the Hintonburg neighbourhood called Hidden Gems was an exciting and well received show. If you missed any of these shows some works are still available at her Home Gallery. Please email for an appointment.

Anderson has studied at the Ottawa School of Art, St. Lawrence College, Haliburton School of the Arts, Ontario, and Springmaid Watermedia workshops, Myrtle Beach, USA and others. She has also studied under international artists such as Carla O’Connor, Alex Powers and Skip Lawrence, Frank Web, Mark Mehaffey and Carole Barnes. All of these people have inspired and energized her, and helped her grow into the artist you see today. Anderson was an active member of The Ottawa Friday painters Group (formerly The Ottawa 8), and the past Vice President of the Foyer Gallery. She is currently a member of the Ottawa Art Association as well as the Eastern and Central Ontario Art Association.

Currently Anderson is focusing on abstracting the figure and the landscape through the use of oil and cold wax medium. Incorporating the cold wax medium into the oil enables Anderson to work in a loose and uncomplicated manner and almost exclusively applies the paint with a bowl scraper no brushes at all. This is an exciting avenue that she has been exploring for the past two years and is very much enjoying this creative process.

Many desktop publishing packages and web page editors now use Lorem Ipsum as their default model text, and a search for ‘lorem ipsum’ will uncover many web sites still in their infancy.

Facebook-f
Instagram
Follow us on our social media pages or email and we will keep you informed about new releases.